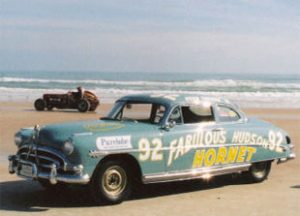 A featured car in the collection is #92, a 1952 Hudson Hornet race car owned by NASCAR champion Herb Thomas. Thomas drove Hornets to his second National Championship in 1953. All together, Thomas and his Hornets won 43 NASCAR races. Hudson Hornet race cars provided the inspiration for Doc Hudson in the 2006 Pixar film CARS. 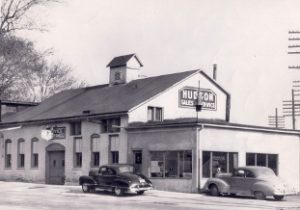 Carl L. Miller opened the Hudson Sales and Service franchise in 1927 as an automobile dealership and repair shop. After the American Motors merger in 1955, the dealership was renamed Miller Motors and added Rambler to the product line. Until 1958, when the Hudson line was discontinued, the dealership sold 1,969 new vehicles, including Hudsons, Essexes, Terraplanes, Ramblers and Metropolitans. After 1958, Carl’s son Jack continued Miller Motors selling Hudson parts and cars until the museum was founded. We are indebted to Jack for preserving the dealership’s authentic condition.

In 1995, Paul “Skip” Ungrodt, Jr and Peter B. Fletcher purchased Miller Motors from Jack Miller and formed the Ypsilanti Automotive Heritage Museum. Jack was hired as a curator and served in that position until he retired in 2013. The museum has been steadily growing through gifts and acquisitions.

The museum’s archives consist of advertising, service, repair, promotional items, and all the records of Miller Motors going back to 1927. Our Ken and Blanche Mericle Collection tells the history of Kaiser-Frazer. The archives are available for ongoing research and will be kept for future generations.

1. To archive information relating to the Automotive industry and its relation to the  city of Ypsilanti  and surrounding communities.

2. To aquire objects related to the automotive industry and its relation to the city of Ypsilanti and surrounding communities.   Objects aquired include,  but are not limited to automobiles,  advertising displays, records, machinery and promotional materials.

3. To display or otherwise  make available to the general public the information and the objects acquired.

4. Said organization is organized exclusively for charitable, religious, educational, and scientific purposes, including,, for such purposes,, the making of distributions to organizations that qualify as exempt under section 501 (c) (3) of the Internal Revenue Code, or correspondening l section of any future tax code.